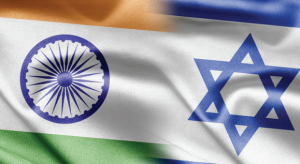 Over the last 5 years, Israel has emerged as India’s largest source of supply for arms and ammunition. Israeli arms exports to India have grown steadily over this period.

India is the destination for up to 41% of Israel’s total arms exports – by far the largest client for the Israeli defence industry.

On an average, Israeli firms have clocked up USD 1 billion a year in sales to India1 The growing relationship between these two countries and their defence OEMs has given fruition to several defence collaborations.

Israel Aerospace Industries (IAI), through its Golan Industries Division, and Taneja Aerospace & Aviation Ltd. (TAAL) of India, have signed a Memorandum of Understanding (MOU) to cooperate in the development, production, and sale of civil and military aircraft crashworthy-seats. The MOU, in accordance with the Indian Government’s “Make in India” initiative, requires these crashworthy-seats to be manufactured in India.

Shachaf Engineering, Israel and Mahindra Telephonics of India signed a MOU to collaborate on the design, development & manufacture of strategic electronics having aerospace, marine and automotive applications. This arrangement involves designing, manufacturing, sourcing activities being carried out both in in Israel and India. It also necessitates the transfer of requisite technology.

Dynamatic Technologies Ltd (DTL), IAI, and Elcom Systems announced a strategic cooperation to jointly address the needs of India’s Unmanned Aerial Vehicle (UAV) market. The cooperation between the three companies aims to provide the best in class solution for the Indian armed forces. It involves transfer of state of the art UAV technology and production capabilities from IAI to DTL and Elcom, in order to enable indigenous capability for UAV systems in India.

The Indian Navy concluded a contract with Tata Power Strategic Engineering Division for the supply of Portable Diver Detection Sonar (PDDS) under the ‘Buy and Make (Indian)’ category to further enhance its underwater surveillance capabilities. The PDDS would be manufactured by Tata Power SED in India at their facility at Bengaluru with Transfer of Technology from DSIT Israel.

The Defence Research and Development Organisation (DRDO) of India has signed a USD 2,400 million deal with IAI to get an advanced medium—range surface to air missile (MRSAM) system by 2020.

Mahindra Defence and Israel’s Aeronautics signed a MOU to partner on the production of Naval Shipborne UAV systems which can be launched and recovered from Indian warships. This partnership between the two companies seeks to offer the maritime version of Aeronautics’ Orbiter 4 to the Indian Navy by manufacturing the same in India.

A small arms manufacturing plant has been setup as a joint venture between Indian defence conglomerate Punj Lloyd and Israel Weapons Industries (IWI). The joint venture plans to develop the plant as a hub for providing weapons not only to Israel and India but also to the world markets.

Bengaluru based Alpha Design Technologies signed a USD 30 million contract with Elbit Systems for the Indian Air Force’s Mi-17 helicopter upgrade programme. Alpha Design, as the major offset partner, will be manufacturing all the key sub-units at its Bengaluru factory.

India’s Hindustan Aeronautics Limited has signed a deal with IAI subsidiary Elta Systems for 83 active electronically scanned array (AESA) radars and an equal number of Electronic Warfare (EW) systems to be fitted onto the Mk 1A variant of the indigenously developed Tejas Light Combat Aircraft.

Hinduja Group flagship Ashok Leyland signed a MOU with Elbit Systems to provide High Mobility Vehicles to global OEMs. These vehicles will be mounted with artillery guns and systems supplied by Elbit Systems.

The Adani group has established a military facility in Hyderabad in partnership with Elbit Systems to manufacture UAVs. The plant has been established to indigenously develop Elbits’ Hermes 900 medium altitude long-endurance UAV, followed by the Hermes 480.